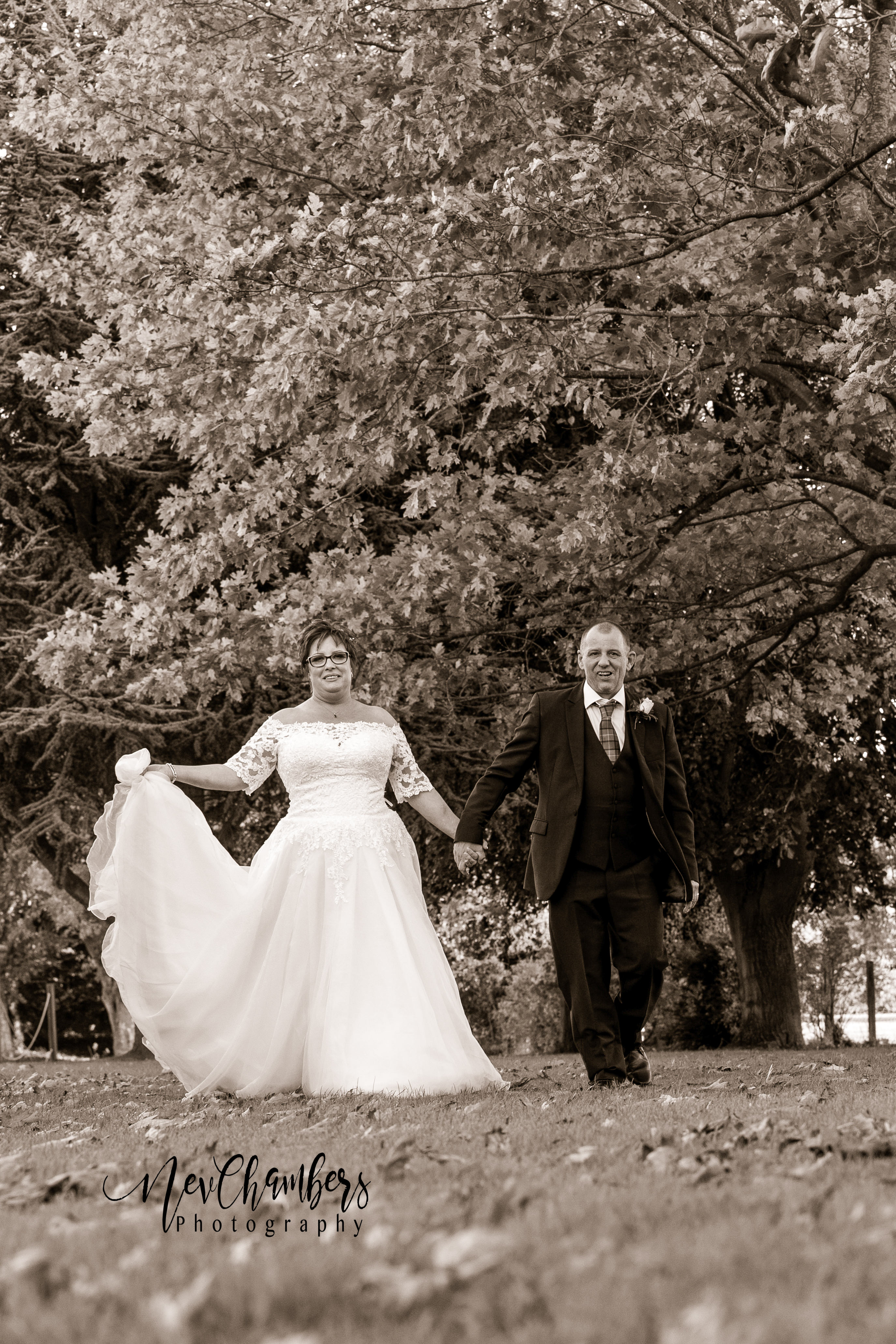 Walworth Castle is a magical and picture perfect wedding venue in Darlington, County Durham. Walworth is exactly how you would expect a castle to look. Its aesthetically pleasing fairytale presence draws brides and grooms in from just that first glance. Nicola and Carl would wholeheartedly agree as they first viewed Walworth Castle during October 2019. Nicola told us that, “we loved this one immediately.”

During September 2019 Nicola’s surprise 50th birthday was organised by Carl and assisted by her cousin, Jo Trainer. Carl isn’t from the Darlington area so together they planned and organised the party AND also the proposal! Whilst Nicola was thanking everyone for coming to the party, Carl took the microphone off her and asked her to marry him with a Haribo ring. Nicola did laugh, but Carl had her a beautiful ring in his pocket.

Fortunately Nicola’s Aunt Dottie, who helped her dress on her wedding day, worked in a bridal boutique so straight away she knew that she was going to that particular boutique. This was a huge advantage as Aunt Dottie has a lot of experience and was able to immediately suggest a wedding dress for Nicola to try on. She was told that, “the style was definitely me and she was right.” She did try on other dresses but none came close to how special she felt in her beautiful wedding dress. Nicola was ready to be a bride at Walworth Castle. She purchased her dress in March 2020 but due to Covid 19 Nicola’s wedding dress was hidden at her Mum’s bungalow for 17 months. During this time no one saw the wedding dress!

The Wedding at Walworth Castle

Originally Carl and Nicola wanted to get married outside in May 2020 but Covid prevented this from happening. However getting married inside Walworth Castle turned out to be a huge positive. They felt that it was more intimate and special. Also this provided the wedding photographer with some delightful backgrounds and they still had access to the picturesque eighteen acres of garden and woodlands.

On the day of the wedding the Groom and Groomsmen wore stylish blue suits from Frank Bird, Wakefield. Nicola tells us that the suits had to be blue as she had ordered her Dad’s tartan (Muir Tartan) for the ties as it was very important to have a connection to him on her wedding day.

A beautiful moment for Nicola was waiting with Finley to walk down the isle and seeing Carl crying. Carl claims that bees had stung his eyes! Whatever you believe, this heart stopping moment was captured by the Walworth Castle wedding photographer. After the tears came the laughter as Carl’s middle name of Walter was revealed.

It was an absolute delight having their family and friends there to witness their special wedding day at Walworth Castle. At long last family and friends could converse, hug one another and have fun. It was very important to the bride and groom that everyone could celebrate together after so long apart.

The theme of family and friends was very strong throughout the day as the table flowers were created by Nicola and her friend Joanne Wakely together with her Mum and Dad as they use to be florists. Elizabeth Anne florists in Wakefield stepped up to make the wedding bouquets when a previous florist let Nicola down. They were already creating the button holes as they are quite close to Carl’s parents, since his brother passed away 24 years ago. This was a lovely connection to Carl’s brother, Marc.

Nicola and Carl named another wonderful moment as being when Carls’ parents got up to dance to their favourite song, they had no idea that this was going to happen but embraced it. Apparently they loved this moment too. The night was rounded off with some champagne spray wedding photographs outside Walworth castle.

They told Nev, their Walworth Castle wedding photographer, that it was a perfect day .

Tips for brides and grooms to be from Mrs Nicola Berettoni

Nicola says, “Don’t stress over the little things because on the day your just swept up with happiness and the main thing is saying your vows and becoming husband and wife.”